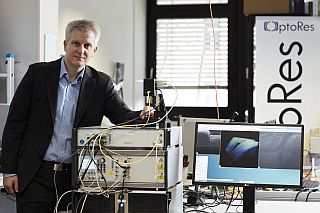 Optores co-founder Robert Huber is nominated for the European Inventor Award, together with James Fujimoto and Eric Swanson. The award  was launched by the European Patent Office in 2006 to recognize groundbreaking inventors. The award ceremony will be held on 15 June 2017 in Venice.

The nomination video was partly shot at Optores' offices in Munich. Check out the video and cast your vote for the popular prize online at the EPO award site.